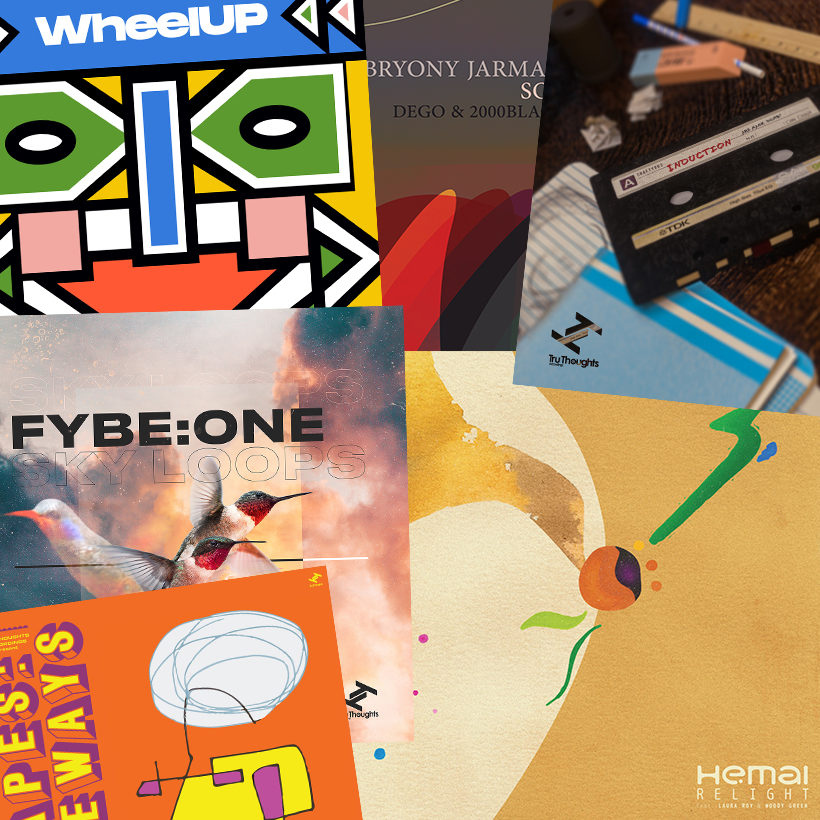 Our recent releases feature several EPs from the newer artists signed to the Tru Thoughts roster that have been announced in the last few weeks, plus a new instalment in the classic long running ‘Shapes’ series.

‘Shapes: Sideways’ is the latest in Tru Thoughts’ series of essential label compilations, compiled and curated by A&R, label co-founder, and renowned DJ Robert Luis. After 21 years of independently releasing music, the ‘Shapes’ series continues to encompass the best of our wide-ranging, eclectic, and international roster. ‘Shapes: Sideways’ features the finest Tru Thoughts classic cuts, recent releases from the new generation of the roster, stirring remixes and world exclusive tracks; released digitally and on limited edition, hand-numbered run of 500 vinyl (that includes a download card with all 32 tracks).

“Shapes: Sideways’ showcases releases from the newer signings on the label alongside the more established artists. This compilation has a number of previously unreleased exclusive tracks too. As usual with these Shapes compilations, there are a number of genres and music styles covered – representing influences from across the world. We always advise if you like any of the individual artists or songs, we hope you explore their catalogue further.”  Robert Luis

Exclusive tracks on the compilation come from Brightonian singer-songwriter and new signee Tiawa on the jagged-operatic “Life Is Not A Crime”; Mancunian MC & producer (legend of the north) Strategy on halftime D&B “Nom Wah Tea Parlour; and the iconic “Strings of Life” production duo Soul Central on the feel-good house-anthem “Work It Out feat. Jennifer Wallace (West Loop Chicago Mix)”.

Take a look at the whole 32 track album HERE

South-London grime artist and producer, Crafty 893 brings a lyrically raw and technical aesthetic to his music that belies his youth. Growing up in an environment commonly associated with ‘The Ends’, Crafty conveys not only his experiences but his aspirations through his forward-thinking songs and instrumentals. “Induction EP” is an introduction to this versatile MC and producer, and his debut release on Tru Thoughts. Showcasing his transition from grime MC to artist, “Induction” is an EP that tailors’ different tracks to a scope of genres, all of which Crafty effortlessly excels in.

Renowned for writing, MCing, producing, recording, mixing, and mastering all his own work – Crafty 893 has been championed by all the key players in the grime world, from innovators Terror Danjah, Sir Spyro and one of the best-loved forces in the UK underground, Big Zuu, who Crafty supported at Outlook Festival in Croatia.

The “Wanezi EP” is fronted by “Stay For Long”, WheelUP’s first collaboration and vocal track that sows the transatlantic seeds between broken beat and hip-hop. The song features Alabamian rapper Brint Story, a lyricist who lays down the harsh reality of Trump’s America. Elsewhere on the record “You Need Loving” soaks in the post-disco influences of boogie; title track “Wanezi” channels afro-percussive vibes; while “Sun City” is an ode to the iconic London garage night of the same name, and a nod to the old school raves of the 90s alike.

“Wanezi is a tiny village where my dad grew up in Zimbabwe. It’s our spiritual homeland for our tribe ‘Ndebele’ and a starting point for the family” Danny Wheeler aka WheelUP explains. The concept and artwork follows on from where the “Ndebele” EP left off, joining the dots of Danny’s Zulu ancestry.

Check out the EP HERE

Bryony Jarman-Pinto’s “dego & 2000Black Remixes” features two remixes of “Sour Face” from renowned broken beat innovator dego / 2000Black. With one rooted in Brazilian funk and boogie and the other delving into a deeper Bruk realm, these re-workings showcase the versatility of the original track which is taken from Bryony Jarman-Pinto’s critically acclaimed debut LP ‘Cage and Aviary’. “Sour Face” focusses on the wider frustrations of everyday life, “of break ups, environmental issues, the album and myself” she confesses.

The limited, hand numbered vinyl release pairs these remixes with a selection of beautifully recorded as-live sessions of songs from “Cage & Aviary” that were performed with a full band at London’s legendary Fish Factory Studios and released digitally as the ‘Fish Factory Sessions EP’. “The sessions were meant to feel live, like a performance.” Bryony explains, “All the musicians have put their ideas into the songs, transporting them to somewhere beyond the album versions and allowing them to take on a new life”.

Check out the “Sour Face” remixes, on both digital and vinyl HERE

“Relight feat. Laura Roy & Woddy Green” is the latest single from producer and multi-instrumentalist Louie Hemus AKA Hemai. Teaming up with vocalists Laura Roy and Woddy Green the hotly tipped 21-year-old makes his Tru Thoughts debut, sonically melding soul and jazz with an electronic tinge – “Production-wise I’m experimenting with the concept of space; bringing together my favourite sounds from around the world and the universe and merging them with UK roots”, he explains.

Creating a landscape ripe for musical exploration in “Relight”, Hemai utilises his featured vocalists to cut through the shifts in tempo and accentuate the hidden depths of the track as it swirls from calm to climactic. Away from his own live instrumentation and intricate production the track features energetic congas from Hemai’s brother and drummer Sam Hemus, and with imagery playing an important role in the meaning behind Hemai’s music the pair also worked together on the single’s artwork, pulling together warm colours and a vibrant energy that mirror the heart of the track.

Born and bred in the UK’s second capital Birmingham, Hemai grew up around jazz culture, music and live musicians, taking influence from the likes of Herbie Hancock, The Gilberto’s and D’Angelo to modern day acts like Zero7 and Corinne Bailey Rae. His 2019 debut EP “Eyes, Closed” received upfront support from Gilles Peterson, Erica McKoy and Papaoul (Worldwide FM) and from his home station BBC Radio West Midlands. The release was closely followed by Hemai’s official remix of Oscar Jerome’s “Gravitate” and being titled one to watch by BBC Introducing’s Jaguar on her Hot List 2020, cementing the now London-based artist’s place in the thriving UK jazz and electronic scene.

“Sky Loops” is the debut Fybe:One EP on Tru Thoughts, the beat-driven release was created at the height of summer as a positive remedy, and is laced with organic sounds underpinned with experimental production.

The “Sky Loops” EP takes its name from Fybe:One’s fondness for filming, photographing and distorting footage of the clouds and his return to his earlier styles of production; “It was like a big loop… going back to the start”, he adds. The integration of this timeless style with hi-hat heavy and synthesised drums and a lack of vocals sets “Sky Loops” apart from Fybe:One’s previous releases, coming together as a positive force set to elongate the joy of sunnier days.

Joining forces with DJ Herse, Duct and Owen Howells, Fybe:One set up the Shades label in 2011 and has been releasing, remixing and collaborating on music for the better part of a decade with supporters of his work including Gilles Peterson, Mary Anne Hobbs, Lauren Laverne and Laurent Garnier.

Creating detailed, melodic tracks that sit across the realms of house, garage and dubstep, Fybe:One’s own releases – beats and songs alike – span a variation of emotion and tempos. Fybe:One has spent the past few years exploring new genres and sounds and collaborating with the likes of Shy FX and Chase & Status vocalist Liam Bailey. He has occasional shows on Music Box Radio and AAJA Radio and has compiled mixes for brands such as Shore Projects and Brydon Brothers. He also creates album covers, graphics and illustrations for Project Mooncircle, EMI, Cavendish Music and more.

You can check out the EP HERE