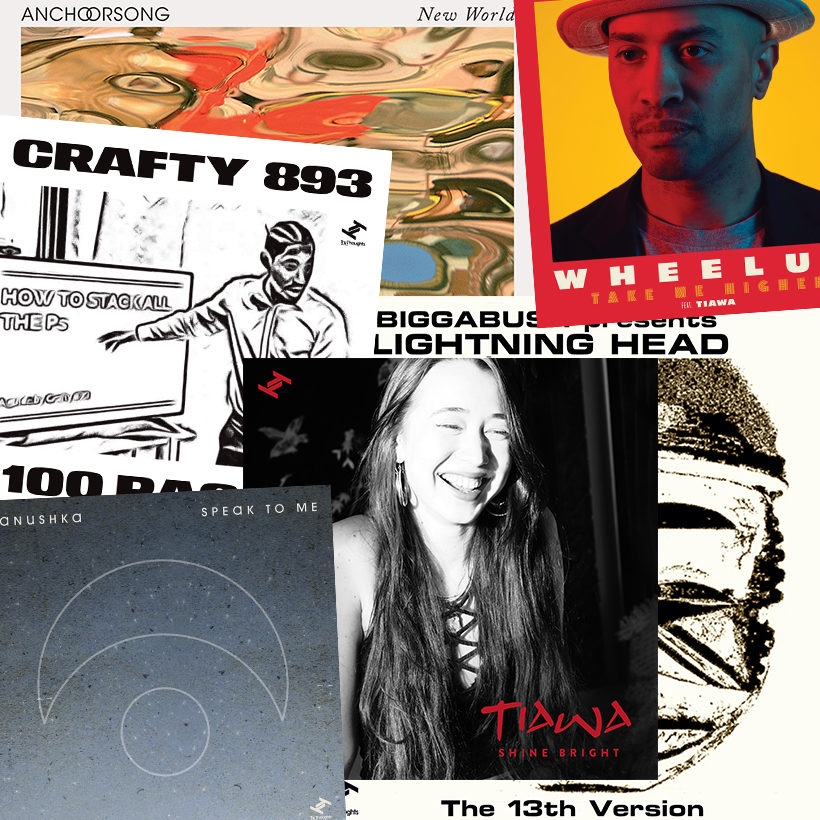 New artists, older favourites and “Fela-electronics” have been released in recent weeks.

Our latest round up starts with “Take Me Higher” in which WheelUP recruits Tru Thoughts label-mate and newcomer, singer-songwriter and MC Tiawa on a track that has been featured on Shaun Keaveny’s BBC 6 Music show as his daily “Liked & Shared” track, aka the Record of the Week. “Take Me Higher” has also been play listed on BBC 6 Music

Aptly WheelUP has said “Take Me Higher is about pushing yourself up to the next level, out of your comfort zone and discovering new things in life”. As well as Tiawa, the single features the rhythm master Nathan “Tugg” Curran aka Planet Battagon (On The Corner Records), who is also a session drummer for the likes of Basement Jaxx, Elton John, Kano and forms part of WheelUP’s live setup.

Check the track out HERE

“100 Racks” is the newest offering from South-London grime artist, MC and producer Crafty 893. A self-explanatory hustle about making 100 grand, Crafty uses an insatiable hook and playful wordplay matched to his protean production to create the perfect soundtrack when “stacking all the p’s”.

“Shine Bright” is the debut Tru Thoughts single from up-and-coming singer-songwriter/MC Tiawa. Meandering between neo-soul, hip-hop and jazz “Shine Bright” bursts with positivity, produced by collaborator and multi-instrumentalist Jack-Chi the song sets the stage for a new chapter in Tiawa’s career on the Brightonian’s hometown label.

Fusing soulful vocals with the jagged edge of a rap-styled flow, “Shine Bright” is built around a Brazilian-styled Rhodes-loop and lyrically sends a universal message that is literal to the meaning, theme and essence of the title. An antidote to the abyss and to smile even in times of hardship, in her words: “The song is about staying positive and upbeat. I hope it will make people feel happy when they hear it, that’s the main thing. It’s strength to be vulnerable sometimes, we are only human.”

Check out the positivity HERE

Anushka “Speak To Me”

“Speak To Me” is a spiritual groove-soaked exploration from future soul and electronica duo Anushka. The track follows “You My Love” – their first release with Tru Thoughts – which received support from the likes of Lauren Laverne (BBC 6Music) and Jamz Supernova (BBC 1Xtra).

Built from a loop written by Max Wheeler (producer) on the way to a gig in Copenhagen, the lyrics for “Speak To Me” are a call to a higher power, the Eternal Mother, from Victoria Port (singer/songwriter) born from feeling at one and safe in nature. “This song was written before I knew the name for Yemaya”, Victoria explains. The Orisiha Yemaya is the Goddess of the Sea and protector of women in the Santeria/Yoruba religion. It is believed in Santeria that Yemaya guides and supports her children, helping them to grow; an ethos and energy that fuels the track from its core.

“Speak To Me” HERE

‘The 13th Version’ is a collection of remixes, bonus tracks, and dubs taken from Glyn “Bigga” Bush aka Lightning Head’s ‘13 Faces Of Lightning Head’ album. Originally released on the veteran electronic dub producer’s own label Lion Head Recordings in 2014, ‘The 13th Version’ sees the likes of post-dubstep producer Geode, the alter ego of guitarist Marcos Garcia (from bands Daktaris and Antibalas) Chico Mann, former Tru Thoughts act Diesler, and many more reimagine Biggabush’s work. “I really wanted to encourage other producers to do interpretations of the album without any pre-conceptions and showcase these in a standalone album. Multiple styles, equally good on headphones or on the floor” Glyn explains.

Internationally known for his work as midi-maestro with Rockers Hi Fi during the 1990s and since the turn of the century his work on Sonar Kollektiv and Stereo Deluxe as Biggabush and Lightning Head. These days Glyn can be found working in his studio in Dorset and spearheading the versatile percussion-group Magic Drum Orchestra on Tru Thoughts. ‘The 13th Version’ spans across afrobeat, afro-funk, afro-jazz, ethio-funk, dub, rap, samba… the list goes on, but Coldcut’s Matt Black describes it best: ‘Fela-electronics”.

Listen to the “The 13th Version” HERE