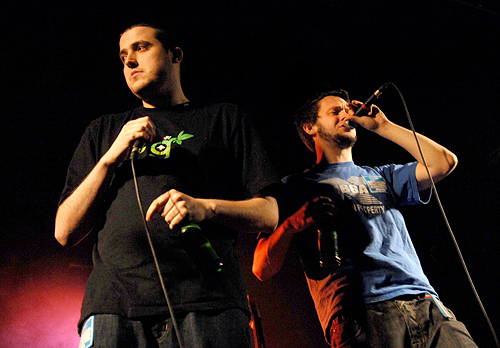 After dropping their demo off at Zebra Traffic HQ in the summer of 2004, Max Wheeler and Pat Hall were immediately picked up by the label. The initial result was their ‘Diggers Don’t Get Days Off EP’, followed closely by their debut album and further EP ‘Freakishly Strong’. The response was immediate and fantastic, gaining some incredible reviews in the music press (see below) and some top notch radio play from Steve Lamacq on BBC Radio 1 (6 weeks running!), Radio 1xtra, Mr Scruff, Choice FM, Kiss FM, Juice FM, Samurai FM and various other radio stations worldwide.

The Diggers continued their hard work and went on to complete a series of live dates in the UK, performing in Manchester (C’mon Feet), London (The ICA, Cargo, The Jazz Café) Brighton (Concorde II, Audio & phonic:hoop), Bournemouth (The Firestation), Leeds (Faversham), Bradford (Love Apple Café), Halifax, Derby, Southampton, Bristol (The Level) and Edinburgh (Trouble), promoting their album. They have also supported De La Soul on the Southcoast leg of their recent UK Tour. They have also remixed Tru Thoughts artist Alice Russell (a reworking of ‘Hurry On Now’ that appeared on the recent TM Juke & Alice Russell 12” Fly In The Hand alongside a DJ Vadim mix). The guys have now completed and are about to release their follow up album ‘The Pleasure Is All Mine’ in March 2007 (which features Nostalgia 77, Rup, DJ Woody and Micall Parknsun), with a single and video (aimed at MTV/MTVBase/Channel U and hosted on the ZT website). They have a feature/interview confirmed for the March edition of Britain’s best selling Hip Hop Magazine Hip Hop Connection along with a promotional track on the covermount mix CD. They’ve also just completed a song with Poland’s top selling hip hop artist O.S.T.R (Sony Records)(http://asfalt.pl/ostr.html) that will feature on his forthcoming LP. The Dirty Diggers are signed to Tru Thoughts’ sister label Zebra Traffic