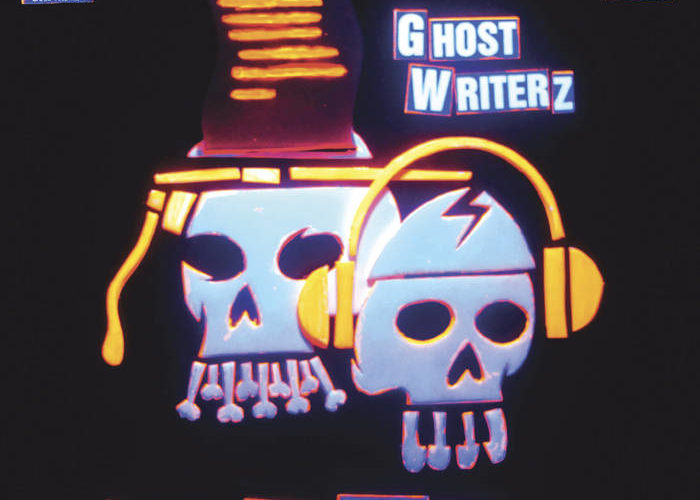 London based producer Sleepy Time Ghost and vocalist (and producer) Jimmy Screech are both proud to be part of the Unit 137 Soundsystem family, while many will also remember Jimmy from his days in Roots Manuva’s Banana Klan and for the solo albums that have earned him props everywhere from RWD Magazine and Capital Xtra to The Independent and The Guardian.

The pair hooked up through a mutual friend, after Jimmy had taken a year’s hiatus from the game, and instantly connected on a musical and personal level, each with a passionate ethos to push the sound forward. “We started work just before Christmas 2012 and carried on working religiously every Friday and during the course of 2013”, recalls Jimmy. “By the following Christmas we had written around 30 songs and the Ghost Writerz was born.”

In addition to the core duo, Ghost Writerz also comprises Jimmy’s right hand man G.O.L.D, the big bad Serocee (Toddla T, Jus Now), the incredible talent of the youth man RTKal, and the sure hand of Hylu in the mix. They also feature Shiffa Dan, Rodney P and Ty and have producer credits from Pete Cannon, Deadbelly, Aries and Curtis Lynch… the list really does go on.

A bedrock of the Sharp And Ready selections for Tru Thoughts, Ghost Writerz provide the first release from the stable with the first full and official outing for “Back It Up” feat. G.O.L.D & Shiffa Dan, a killer single that has already had upfront support from the likes of Ras Kwame on Capital Xtra and Toddla T, B Traits and Monki on Radio 1/1Xtra, as well as 1Xtra big guns MistaJam and Charlie Sloth; look out for this and many more releases across the sonic spectrum.

The spellbinding array of styles that this mysterious duo turn their hands to, with seriously heavy results, fuels suspicions of supernatural Sound System forces at work…