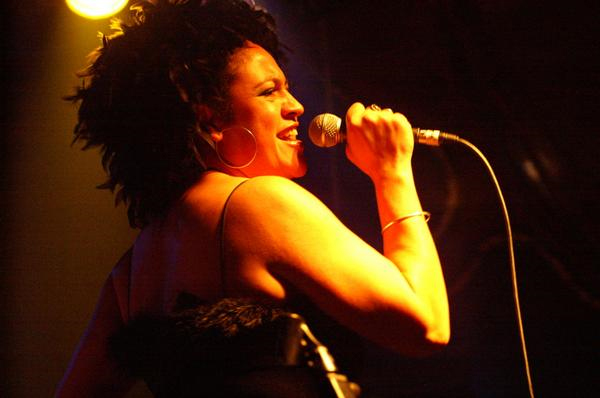 Kylie Auldist has been singing for as long as she can remember and possesses an undeniable natural vocal talent: the kind of powerful yet nuanced soul voice that comes along only once in a while, and when you’ve heard it once you never quite forget it. She is half-Samoan but born and bred in the outback of Australia. Kylie recorded her first song at the age of six, and from the age of fifteen could be found singing country and western songs in pubs – which, for the only non-white in town, was a gutsy move (in her words it was “a bit like the reverse of Steve Martin in ‘The Jerk’”).

Kylie moved to Melbourne to pursue her musical ambitions, where she has since performed with a variety of funk bands (including Polyester and Mega Bias), provided studio and live backing vocals for music legends such as Renee Geyer and Jimmy Barnes. While in Melbourne, Kylie hooked up with kings of funk The Bamboos and provided stunning guest vocals on their acclaimed album, “Rawville” for Tru Thoughts. The Bamboos and Kylie Auldist toured Australia and beyond, landing on the fair shores of Brighton, UK, in 2007, where Tru Thoughts snapped Kylie up after being bowled over by her spectacular and charismatic performance. Kylie signed to Tru Thoughts for multiple albums, and her debut single “Community Service Announcement” was released on 28th April 2008, followed by the album, “Just Say”, on 26th May. A heady mix of Kylie’s distinctive, soulful vocals and the flawless, funk-fuelled production of Bamboos’ main-man Lance Ferguson, “Just Say” created a buzz immediately and was dubbed “the sound of the summer” by many. In the UK Mark Lamarr (then on BBCRadio 2) declared it “one of the best albums of the year”. Further afield, tracks from the album have gained national radio playlisting in France and Kylie’s native Australia. Following the release of her debut, Kylie Auldist recorded live radio sessions with The Bamboos for Mark Lamarr’s God’s Jukebox on BBC Radio 2, and the BBC 6Music Funk & Soul Show, bringing her further to the public’s attention. On her second album, ‘Made Of Stone’, which came out in August 2009, Kylie again enlisted the production skills of Lance Ferguson and the backing of The Bamboos to create a sizzling collection of original, grown-up pop with warm, retro-inspired funk and mod soul flavours complementing the razor sharp musicianship, crystal clear production and Kylie’s incisive lyrical voice. Following European tours with The Bamboos and Cooking on 3 Burners, and a sold out Bamboos tour of Australia, Kylie releases her highly anticipated third album ‘Still Life’ in Autumn 2012 via Tru Thoughts.