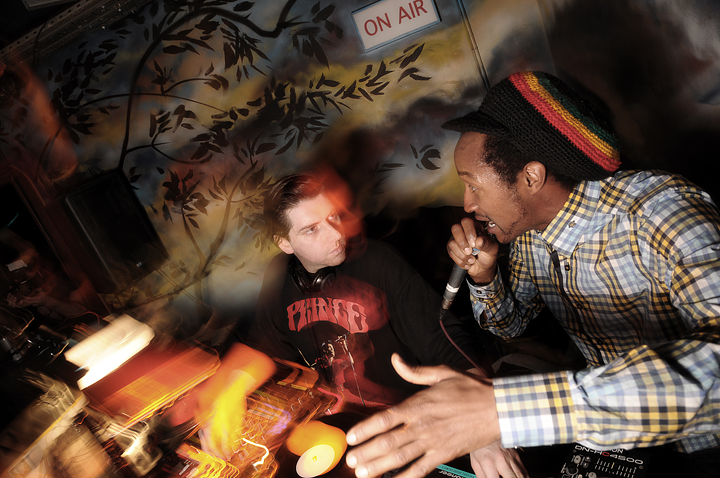 This is the next step in the evolution of the genre-crossing but mainly reggae-rooted producer Wrongtom, following on from the huge success of the Wrongtom Meets Roots Manuva project, for which he took on the task of reworking tracks from the legendary UK rapper’s career, resulting in the hit album ‘Duppy Writer’ (Big Dada).

“The bass bounces, never deviates, slightly maddening, effortlessly cool” – BBC “Authentic slice of reggae, dancehall and dub…It is pretty special” – Blues and Soul Magazine “4 STARS” – Q Magazine “Essential Listening” – MOJO  Wrongtom meets Deemas J is a heavyweight project bringing to fruition his years of collaboration with the world-beating MC Deemas J, a long-time friend and creative cohort, on a stunning full album of new material. It is the first in a series of Wrongtom collaboration LP’s with different vocalists. Wrongtom and Deemas J met in their native London in the mid ‘90s, when D was MCing for Scandal FM, an underground junglist pirate station. They started going to funk nights together and formed an acid jazz band, playing gigs throughout the capital and around the UK. A decade followed in which they drifted apart, each following his own path and honing his craft. For Tom this saw him getting mixed up in the pop world, including touring worldwide with Hard-Fi (which came to its illogical conclusion on stage at Wembley Arena as 10,000 perplexed indie kids listened to a selection of B-More, Shut Up & Dance and Italo House classics) and getting production credits on a UK Number 1 album; paving the way for the success of his reggae/dub collective Stoneleigh Mountain Rockers, with whom he’s worked on projects for Trojan Records, Pama International (featuring 2 Tone luminary Lynval Golding), and the subsequent collab with UK rap legend Roots Manuva. Deemas was also travelling the world, building up a formidable reputation as a go-to MC with equally genre-busting credentials; his virtually endless CV boasts collaborations with everyone across the worlds of Drum & Bass, Old School, Garage, Reggae and Hip hop, including High Contrast, Andy C, Nicky Black Market, Ras Kwame, Pied Piper, EZ and Kenny Ken to name just a few. In 2007 they reunited. At the time, in his customary globetrotting fashion, Tom was remixing for Citizen Sound, a Canadian band on a German label. He got D involved on vocals, and with the benefit of all the experience they had respectively racked up, their partnership took off once again to a new level. ‘In East London’, released Sep 2012, was the first in a series of Wrongtom collaberation LP’s with different vocalists. The overriding upbeat, celebratory tone of the album is reflected in the artwork, its themes captured in fine style by legendary illustrator Tony McDermott, who also created the artwork for ‘Duppy Writer’, and historically was responsible for the look of legendary reggae and dancehall label Greensleeves; his famous cartoon covers becoming synonymous with dub records by Scientist and Mad Professor in the early ‘80s.