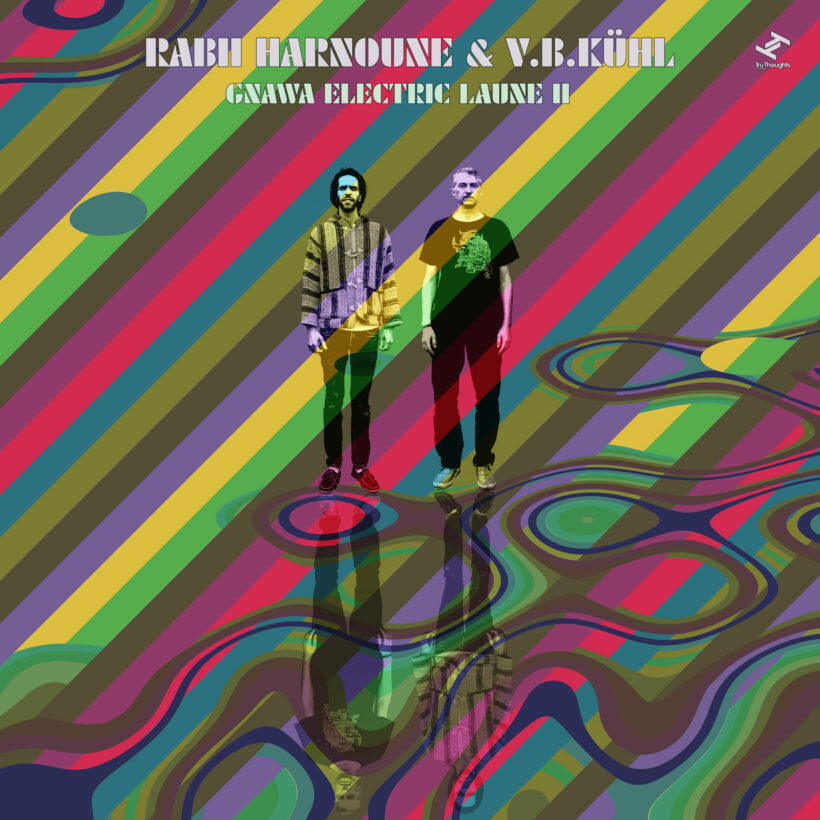 ‘GNAWA ELECTRIC LAUNE II’ is a more defined follow-up to the duo’s debut. The birth of the ‘Gnawa Electric Laune’ concept resulted in a fascinating cross-cultural record that won over the likes of Gilles Peterson (Winners 2020), Tom Ravenscroft (BBC 6Music), Songlines and many others, for its electric and otherworldly bridge from old to new.

All songs on the new album weave Gnawa folklore culture into its lyrical themes and conceptual approaches. Singles on ‘GNAWA ELECTRIC LAUNE II’ include lead-track “Aisha”, a tale about the mythological female figure renowned as the greatest woman of all time. “Laafou” is about the end of suffering for a majestic singer called Bilal Ibn Rabah al-Habashi, hand-picked by the Prophet Muhammad himself and “Koyo Koyo”, a term for the righthand man of the Gnawa master who learns to play the Qarqaba (also known as Krakebs, an iron castanet-like rhythmic musical instrument).

‘GNAWA ELECTRIC LAUNE II’ sees the duo change up their creative approach, cementing originality at the core of the record, as Rabii explains: “Our first album was like writing on an empty piece of a paper, but the second is like turning the page and pushing the boundaries further. We´re not starting every song from a traditional Gnawa piece and then putting music around it like we predominantly did on the first album. We used different ways to create new tracks, like composing from scratch with traditional parts or using existing tracks like we did with our first single Aisha.”

V.B.Kuhl adds: ”The first album was the door opener and now we´re trying to create even more original ideas, combining old and new in a soulful way. Rabii also used more quotations of old poems and writings to put the lyrics together. The second album is more open in creation and it’s a bit more beat driven than the first one. It’s still a fusion of different cultures and we’re trying to find our own way of expression and building bridges. It’s an adventure.”

Album opener “Maya” lays the cultural and political foundations of the record, a song where Rabii pays respect to his old master Abdellatif El Makhzoumi (“god rest his soul”) but also opens up on the struggle and journey that Rabii has undertaken in order to propel his musical career. Opening up about the ordeal Rabii says: “It is difficult to summarise these last 7 years in a few lines. It was one of the most difficult experiences I have had; I felt like my Master was singing this song for me, or about me, while there.”

Elsewhere on the record “Jilani” aka ‘crown of knowers’ tells the story of the leader in Sufi philosophy Abdelkader El Jilani Sheikh Abd al-Qadir al-Kilani, while “Samaoui” explores the sanctity of water in Africa and “Gazelle” is a homage to a famous piece of desert music that deals with love of the beloved. V.B.Kühl’ diverse knowledge of electronic music playfully cements the music into a Gnawa-fusion framework, such as his addition of downtempo four-to-the-floor grooves to Rabii’s Gumbri on “Samaoui”; the influence of dark bass music and the use of a vocoder seeping in on “Quazar”; and the crossover of rockabilly and hip-hop beats on the infectiously catchy “Sofi”. As V.B. perfectly summarises “Gnawa meets beats in a soulful fusion! The Journey continues…”