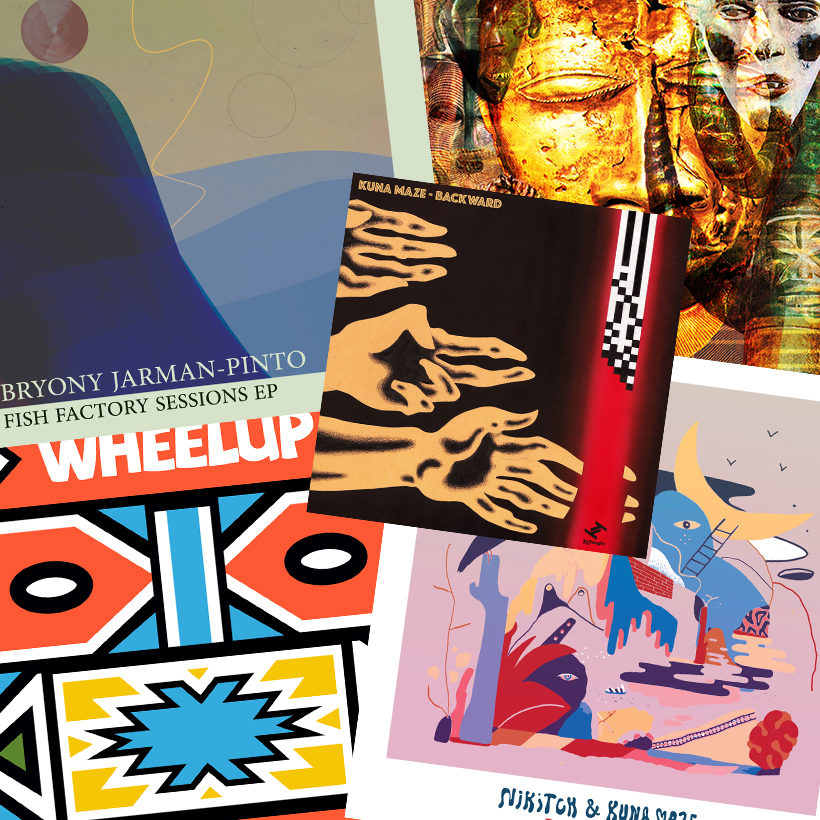 Our most recent album and EP releases have covered electronic dub, jazz and broken beat, here’s a round up of the last few weeks.

Originally released on electronic dub producer Glyn “Bigga” Bush aka Lightning Head’s own label Lion Head Recordings, “13 Faces Of Lightning Head” has now been re-issued on Tru Thoughts. 2008’s “13 Faces Of…” stylistically ranges from straight afro-beat, afro-funk, afro-jazz, with diversions of ethio-funk, dub, rap and what Coldcut’s Matt Black describes as “Fela-electronics” and features guest vocals from Earl Zinger (aka Rob Gallagher/The Diabolical Liberties), Candice Cannabis (NYC rapper for Bigmama Industries), the late great Venezuelan dub star Blanquito Man (Up, Bustle & Out/King Chango) and Belfast-based Nigerian MC Lariman (Calibre, Analogue Minefield, Firehouse Skank). 13 different faces of one uncut gem, each with its own way of dazzling. Internationally known for his work as midi-maestro with Rockers Hi Fi during the 1990s and since the turn of the century with his work on Sonar Kollektiv and Stereo Deluxe as Biggabush and Lightning Head these days Glyn can be found working in his studio in Dorset and spearheading the versatile percussive-group Magic Drum Orchestra on Tru Thoughts.

The “Ndebele EP” (pronounced in-de-bele) is the brand-new EP from broken beat revivalist, producer & DJ WheelUP aka West London’s Danny Wheeler. Conceptually formed around his father’s tribe in Zimbabwe, the “Ndebele EP” see’s Danny sonically push the boundaries of broken beat, with four dancefloor tracks that effortlessly fuse in elements of nu-jazz, leftfield house/techno and echoes of disco-cuts. Danny has cemented the WheelUP name as part of the new school of bruk – garnering approval from respected radio and club DJs such as Gilles Peterson, Toddla T & Jamz Supernova and many more.

Listen to the “Ndebele EP’ HERE

‘Débuts’ is France-via-Brussels duo, Nikitch & Kuna Maze’s (aka Nicolas Morant & Edouard Gilbert) first full length album. Building on their collaborative EP “Mush”, ‘Débuts’ continues to explore the melting point between jazz and club culture, interspersed with the signature sounds of broken beat, Chicago footwork, UK garage, Detroit house, and underpinned by their road-tested live format. The album has been well received with Juno Download including it in their #brokenbeat #nujazz #nusoul ‘Best of 2020 So Far’ selection: “In a truly refreshing and unique album from the French- Bruxelles duo, the pair do Tru Thoughts a true service by delivering a colourful and spritely album that’s as much broken beat as is beat down and beautiful. With too many influences and genres to mention, this will go down with us as Tru Thoughts’ best release of the year.”

The “Fish Factory Sessions EP” presents a selection of beautifully recorded as-live sessions from songwriter and vocalist Bryony Jarman-Pinto at London’s Fish Factory Studios. Reworking tracks taken from her critically acclaimed debut album ‘Cage and Aviary’, the EP includes singles “Day Dream (Fish Factory Session)” and “Emerge (Fish Factory Session)” alongside previously unreleased versions of “Sun Kissed”, “Sweet Sweet” and “All About Life”. Built over 20 years ago by Italian drummer Antonio Feola and famed within the jazz community, Fish Factory Studios provide the perfect setting for Bryony Jarman-Pinto’s harmonious vocal range and improvised musical interludes. Complimenting her vocal and woodwind offerings are bandmates Alley Lloyd (bass, guitar, backing vocals), Vanessa Rani Chutturghoon (percussion, backing vocals), Dwayne Kilvington AKA Wonky Logic (Rhodes) and Matthew Davies (drums). “The Fish Factory Sessions were meant to feel live, like a performance, rather than a studio session”, Bryony adds. “All the musicians have put their feel and ideas into the songs, transporting them to somewhere beyond the album versions and allowing them to take on a new life”.

“Kuna Maze creates hybrid pieces at the crossroads of genres” – Mixmag FR
“Backward” is a new direction for Kuna Maze and a new chapter for the artist. “It’s a look backwards to go forwards” explains Edouard Gilbert aka Kuna Maze. “It’s the first time on my solo project, that I’m using my background and training as a jazz musician.” Shedding off the post-dubstep sound that was linked to Kuna Maze’s initial success in his hometown of Brussels, “Backward” see’s the DJ, producer and multi-instrumentalist return to his roots, applying his studies of jazz at the Chambery Conservatory in France, to his musicianship and work. “I want to make music that makes people want to dance. That’s why I love broken beat because it’s at the meeting point between jazz and dance music”. It’s not just broken beat that seeps through on the record, pockets of UKG/garage, house and jazz-fusion amalgamate into the sonic palette of “Backward”. EP opener “BrkBx” (Broken Bruxelles), is an ode to the de facto capital of the EU re-contextualised with the sounds of UKG, “Something To Say” meshes broken beat with the romantic edge of rhythmic Brazilian-funk, the hypnotic allure of the layered vocals draws the listener in as the subtly of a whistling melody cradles in the back of your ears and title track “Backward” uses house music’s inter-cosmic quality to evoke feelings of lost futures and hauntology, as the eerie jazz-keys contrast against the thumping beat.

Head “Backward” and check out the EP HERE