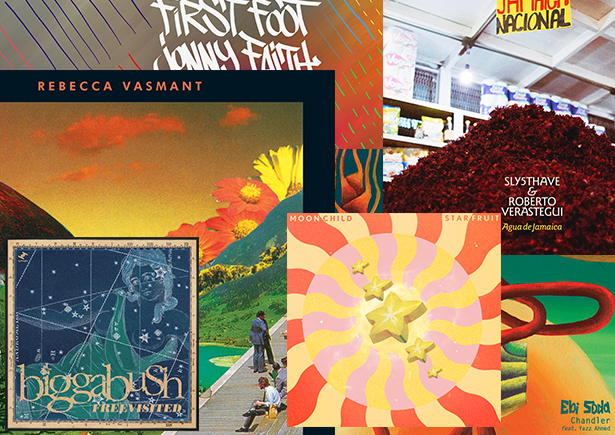 We’re looking ahead to the music that we’ll be releasing this year and bringing a little bit of 2022 positivity on ‘Blue Monday’. We have an exciting line up that features jazz, R&B, broken beat, soul, plus electronic and dancefloor tunes set to drop. The third Monday of January has been awarded the gloomy title of Blue Monday due to a combination of post-Christmas blues, cold dark nights and the arrival of unpaid credit card bills, with the original origins of the concept being “to inspire people to take action…” We hope that the releases that we have highlighted below might bring you a little Mid-January inspiration.

Last Friday we released our first vinyl of the year, the STR4TA Remix of Anushka’s “Bad Weather” in which Gilles Peterson and Jean-Paul “Bluey” Maunick (Incognito) AKA STR4TA transform the track with their iconic Brit-funk style; the 12” is released on a limited 500 press and available now at https://truthoughts.ffm.to/bwstr4ta.owe

The first full length album of 2022 is BiggaBush’s ‘Biggabush Freevisited’. Glyn “Bigga” Bush was in the studio for much of the lockdowns between 2020 and 2021 revisiting ‘BiggaBush Free’, an album originally released in 2004. The newly-revised album ‘Biggabush Freevisited’ sees BiggaBush rebuild his original compositions, improving the sound, arrangements, and production. The songs were rebuilt from the ground up, utilising the skills, studio experience and better technology gained in the interim and rejigging the running order and bringing in some other cuts that didn’t get a proper release first time around, and re-uniting with some of his former Rockers Hi Fi collaborators. “It took on a life of its own… I ended up re-producing virtually the whole album, adding a live brass section, new vocalists and arrangements. Kind of a remaster plus, plus…” Glyn explains. As with any Biggabush project, the album covers an array of genres, from dub, instrumental hip-hop, ambient dub, electro, deep house, prog flavours and everything in between. ‘Biggabush Freevisited’ is out on Friday 21st Jan https://truthoughts.ffm.to/freevisited.owe

Jonny Faith’s ‘First Foot EP’ also gets a full digital release on the 21st January, having been available to download exclusively on Beatport since the 7th January. The EP sees the Melbourne-based producer and DJ making a return to Tru Thoughts exploring the resurgent sounds of broken beat / bruk: “Some of my earliest forays in music production were dabbling in broken beat and bruk, but this feels like my first proper broken beat release” Jonny explains. The EP also features a jungle edit titled ‘Jonny’s Drumfunk Dub’ of Faith’s song “Slumber” from his sophomore album ‘Sundial’ https://truthoughts.ffm.to/firstfoot.owe

Moonchild return with their fifth studio album on 11th February. The result of the LA-trio Amber Navran, Andris Mattson, and Max Bryk’s ten years spent working and growing together, ‘Starfruit’ showcases the respect, musical understanding, and love the trio have, both for each other and for the noteworthy list of collaborators featured on the album. Bringing a host of beautiful melodies and personal lyrics, ‘Starfruit’ features Lalah Hathaway, Alex Isley, Tank and The Bangas, Rapsody, Ill Camille, Mumu Fresh, Chantae Cann and Josh Johnson. “This is our 5th album, which felt like a big milestone to us. They all added their magic touch to the songs and really brought the music to a new and special place,” Amber muses. The album is released worldwide on black or marbled double vinyl, and on CD and digital https://moonchild.ffm.to/starfruit.owe

Producer, multi-instrumentalist, composer and arranger Sly5thAve collaborates with pianist and composer Roberto Verástegui on ‘Agua de Jamaica’, out 25th March. The pair originally met whilst studying Jazz in Texas and began piecing together the release on Sly5thAve’s first visit to Mexico, over a drink of Agua de Jamaica – a drink made with water, hibiscus flower and sugar. Recorded during lockdown in Mexico, the LP is built from a passionate and comprehensive understanding of Jazz, a love of Hip Hop and Mexico City’s ever-vibrant artistic culture, Latin flavours, and the African roots from which these sounds grew. Epitomising this fusion of sounds and collaborative talents on introductory single “Tie Break” (out 27th January), Sly5thAve reworks a track originally written as a big band chart for the Orquesta Nacional de Jazz de Mexico by Roberto https://truthoughts.ffm.to/tiebreak.owe

Born from ten-hour jam sessions in peeling Brighton bedsits, the technical parameters of a bootstrap recording process and the osmotic, multi-genre influence of internet music archives, quintet Ebi Soda have been steady-cultivating a unique sound amidst the exploding UK jazz scene. Balancing irreverent musical and technical improvisation with an uncompromising instinct for vibe and prodigious musicianship, the Ebi ascent has been swift, despite their steep rise the Brighton outfit have preserved as much as possible of their unique recording process, originating from their very first sessions ‘Honk If You’re Sad’, their second full-length album, stays true to these foundations, while bringing more ambitious experimentation, technical mastery and a stellar lineup of guest players to the studio including Yazz Ahmed, Deji Ijishakin and Dan Gray. In typical Ebi Soda style, while recalling jazz pioneers in playing style, ‘Honk If You’re Sad’ draws from a vast neural network of influences: a digital soup of trap, drill, dub, post-punk and no wave to name but a few. Following the release of “Yoshi Orange”, the second single from the album “Chandler feat. Yazz Ahmed” drops on 3rd February https://truthoughts.ffm.to/chandler.owe

Rebecca Vasmant released the lead track form her forthcoming “Dance Yourself Free EP” in November,  with the EP dropping in April. “Dance Yourself Free” celebrates the freedom of being in the moment and forgetting everyday stresses and worries; with Rebecca adding: “That beautiful moment when every person in the club is united by the music. In that moment, we are all the same, we are all happy and we are all free. That’s the “Dance Yourself Free” moment”. Second single form the EP “Broken Biscuits” is out on 17th Feburary https://truthoughts.ffm.to/brokenb.owe

We are also excited about live music in 2022, three Tru Thoughts acts will be at Paper Dress Vintage for Independent Venue Week 2022 featuring a headline set from broken beat revivalist, producer & DJ WheelUP plus support from Aurora Dee Raynes and a DJ set from Afronaut. Tickets and more info at https://tru-thoughts.co.uk/tru-thoughts-live-wheelup-aurora-dee-raynes-afronaut/