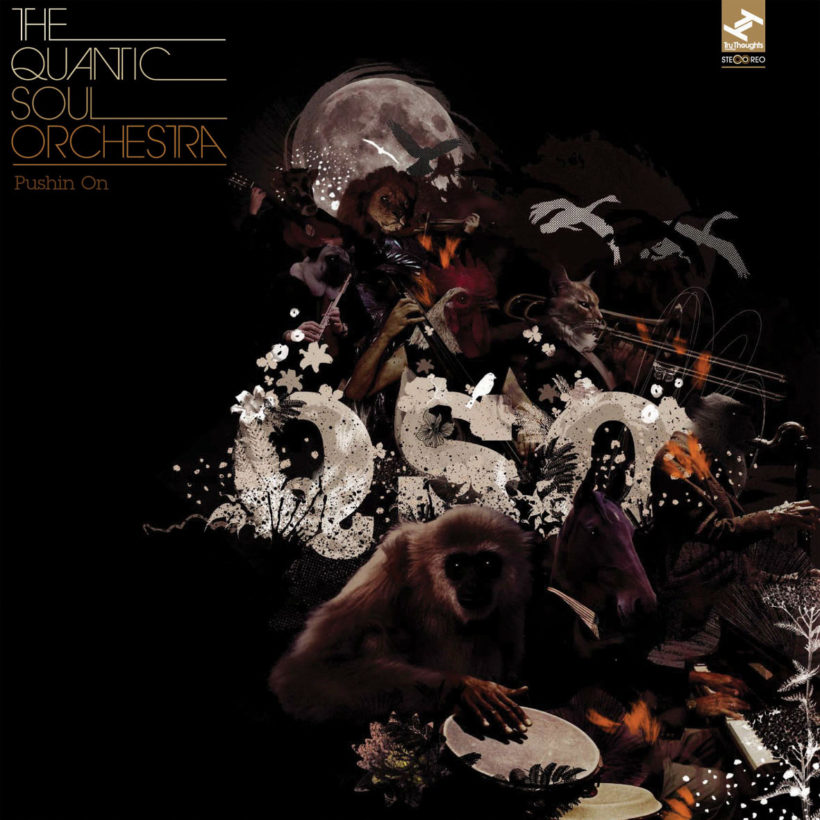 Pushin On is an apt title for The Quantic Soul Orchestras second album. The positive reactions from across the world on the back of the release of the Stampede album have been incredible. The sleeve notes on that album explained what the QSO are about, but for those of you who are yet to pick up a copy here is a bit of brief background information. The QSO is the project of Will Holland, multi-instrumentalist, writer, arranger, producer and all round hard working man (James Brown will always be the hardest working man but Mr Holland is close!). It is separate to his Quantic project as this is strictly about live music all the way, no samples or studio tricknology allowed. The QSO is not the live band for his Quantic music, but a separate project where Holland explores the funk sound he is passionate about (we hope this information will stop the continuing confusion about the two different artist names). The Soul part of the QSO name is meant to represent the traditional American meaning of this music.

On the release of Stampede, Holland put together a live band to transfer his songs onto the live circuit. Initially they played some of the smaller venues across the UK, however the energy and word of mouth buzz about the band meant that within six months they were getting booked to play larger venues, eventually headlining gigs and performing at festivals including The Big Chill, Roskilde, Glastonbury as well as taking their sound to Turkey, Australia, Switzerland, France, Holland and Spain. A testimony of Holland as a bandleader is that he has put together a show that works on huge festival stages as well as small basement venues (both of which the QSO are always happy to perform at).

The hugely influential sound of funk was continuing to show its power, as a sound you cannot help but dance to. It also showed good music is good music no matter what the genre. Funk is not retro. Hip hop is not classed as retro even though it is over 30 years old, and nor should funk be. Both styles of music stem from the Blues and Jazz and both are hugely relevant in the 2000s.

The music on this album explores a number of styles through the diversity within funk, and are in no doubt influenced by Hollands travels across the world promoting his music. The majority of the album is written by Mr Holland, and instead of going into descriptions of individual tracks we think it is probably best to let the good music do the talking, but please do check the credits on each track to acknowledge the performers and players. The two cover versions on the album can be described as DJ/club anthems. Get A Move On was recorded especially for Mr Scruff, who has been a big supporter in his excellent DJ sets of all things Quantic and Tru Thoughts from day one. Feelin Good was actually commissioned as a one-off for use by a major label. When we heard the recording we wanted to keep it for Tru Thoughts and due to a twist of fate we managed to get it on the album (all be it one hour before it was mastered!).

The QSO is about making raw music that is both enjoyable to listen and dance to. Like the original pioneering bands from the 70s, it can help you forget about your troubles, celebrate good news or just help you wind down at the end of the day. At a time when governments across the world are trying to scare us all, making music to bring people together in a positive way can only be seen as a good thing. All the tracks here have been enjoyed by people with different cultures and languages across the world, showing that music can do something many governments seem unable to. One thing we know for certain, from the huge amount of feedback we’ve had about the QSO from across the world, is that this sound will continue to survive and funk will keep pushin on.