Hot 8 Brass Band are a twice Grammy-nominated New Orleans based brass band, whose sound draws on the traditional jazz heritage of New Orleans, alongside more modern styles including elements of funk, hip hop, rap, and its local variation, “bounce.”

Transcending genres and trends, Hot 8 have performed and collaborated with the likes of Jon Batiste, Blind Boys of Alabama, Basement Jaxx, Alice Russell and George Ezra, provided live support for Mos Def, Lauryn Hill and Mary J Blige and have decade long affiliations with actor/BBC 6Music DJ Craig Charles, among other tastemakers, DJs and journalists around the world. Their second album ‘The Life and Times Of…’ was nominated for a Grammy in 2013 and the band have since had a second Grammy nomination in 2021 for their work on ‘Album of the Year’ nominee, Jon Batiste’s ‘WE ARE’. Further acclaimed releases such as ‘Vicennial…’,  ‘On The Spot’ and “Take Cover”, continue to exemplify their ability to honour their city’s musical traditions while forging their own powerful legacy.  Mixing an old school street brass approach with funkier currents and hip hop vocals, Hot 8’s magnificent originals are juxtaposed with fresh versions of Snoop Dogg, Stevie Wonder, The Specials, and of course their anthemic take on Marvin Gaye’s “Sexual Healing”.

Inspired early by the music of the Dirty Dozen Brass Band and Rebirth Brass Band, original bandleader Bennie Pete worked together with trombonist Jerome Jones and bass drummer Harry Cook to bring together members of two existing bands at Fortier High School – the Looney Tunes Brass Band and the High Steppers Brass Band – to form Hot 8 Brass Band in 1995. They gained local recognition playing on the streets of their hometown, in Second Line Parades and at traditional Jazz funerals. Cutting their teeth by playing mainly pop/soul cover versions and traditional pieces, they also developed a repertoire of original material.

The release of their first album ‘Rock With The Hot 8’ was impeded by the devastation of Hurricane Katrina in 2005 as the lives of all band members were heavily impacted and the band’s career progression was put on hold. During this time, Bennie Pete and his bandmembers used their music to support and rally the displaced community, via various charity and community initiatives.

In 2007, multi-instrumentalist and producer Quantic picked up on Hot 8 Brass Band’s cover of “Sexual Healing”. Playing it live at a DJ set in New York, the track gained an unprecedented round of applause and Quantic sent it to Paul Jonas and Robert Luis at Tru Thoughts Records in Brighton, UK. The pair travelled to New Orleans with the intention of meeting and signing the band, beginning a long and ongoing partnership between band and label that started with a reissue of ‘Rock With The Hot 8’.

The success of ‘Rock With The Hot 8’ – including the band’s renowned cover of “Sexual Healing”, as well as the Snoop Dogg cover “What’s My Name (Rock With The Hot 8)” – paved the way for the band’s second album ‘The Life & Times Of.. The Hot 8 Brass Band’. Released in late 2012, the LP was nominated for the Grammy Award for Best Regional Roots Music Album. The first in a two-part set of albums, it was closely followed by sister release ‘Tombstone’ in 2013. Hot 8 Brass Band celebrated their 20th anniversary in 2015 with the release of ‘Vicennial’, featuring raucous cover versions and original numbers. This milestone release gained positive coverage from high profile publications including The Sunday Times, Independent On Sunday, Songlines and Metro.

In 2017, Hot 8 Brass Band celebrated the live music of New Orleans, with a studio album that focused on capturing the spontaneous live energy of their street performances. Gaining the band further media recognition from The Guardian and The Australian, the release followed a sold-out show at London’s Roundhouse and an appearance at Glastonbury Festival. Their midday opening of the West Holts stage attracted the largest crowd in the stage’s history. They went on to play other large festivals and outdoor events including Fuji Rock, Roskilde and WOMAD.

At the House Of Common event in 2017, the band brought a taste of a New Orleans street party to London, leading thousands of revellers in a parade around Clapham Common. The procession was led by BBC presenter and DJ Craig Charles, a long-time fan and champion of the band. 2018 saw the release of Hot 8’s “Take Cover” EP, which featured their “Love Will Tear Us Apart” ode to New Orleans. Following this release, the band appeared on BBC 6Music’s Christmas Party, Jools Holland’s New Years Eve Hootenanny (alongside Nile Rogers, Michael Bublé, George Ezra and more) and shared a stage with George Ezra at the 2019 Brit Awards shortly after he won the award for British Male Solo Artist. Pre-covid, the band supported George Ezra on a mammoth European tour, before heading out on their Mardi Gras tour, selling out Brighton’s Dome and performing as part of BBC 6Music’s Festival.

Hot 8 Brass Band’s rhythms are loose-limbed and hard-hitting, with most tracks featuring a sousaphone prominently. This frequently sets up and maintains short rhythmic and melodic grooves that dominate with rippling authority the band’s recordings. The legendary group have established themselves as a dominant force on New Orleans streets—the band you want to dance behind during a Sunday second-line parade or witness jazz funeral.

Brass band-related activities have been a vital part of New Orleans’ African American community life for over a century, serving as an important source of celebration, bonding, strength, pride, and both individual and collective expression. Jazz funerals are among the most curious and well-known New Orleans brass band customs.  As an exercise of the belief in “rejoicing at death,” the jazz funeral juxtaposes grief and joy. Slow, sad hymns and dirges are played en route to the cemetery, followed by up-tempo songs and joyous second line dancing in a final procession away from the grave.

The city’s traditional obsession with music, parades, dancing, and the rise of black benevolent organizations, has helped to maintain and support brass band activities and culture. Dozens of benevolent societies and groups known as “social aid & pleasure clubs” sponsor weekly Sunday parades. Very different from New Orleans’ better known Eurocentric Mardi Gras parades, the black social club events consist of three main parts: divisions of colorfully dressed social club members, one or more brass bands and the second line—a crowd of up to several thousand people who follow and dance alongside the parade throughout its several-hour duration. The free-form second line dance performed by club members and the crowd, both of whom dance with umbrellas and handkerchiefs, is derived from West African processions. The intensity that builds from the constant creative interaction between hot music and improvised dancing often erupts into a euphoric dimension in which a sense of total freedom, equality, limitless power, and a spiritual redefining of earthly reality seem to overtake all of the participants. Many legendary and influential musicians who would migrate from New Orleans by the 1920s and influence the direction of American music—among them King Oliver, Louis Armstrong, and Sidney Bechet—got some of their early training and experience in street parades and funerals.

The story of the Hot 8 Brass Band has been one of tragedy and triumph. Over the years the Hot 8’s ranks have been decimated by the deaths of four original members due to street violence and illness. The devastation of Hurricane Katrina in 2005 was a life-altering turning point; during which 80% of New Orleans flooded, untold numbers of inhabitants died, and long-term displacement and misery affected hundreds of thousands—raised real concerns about the survival of the city and its indigenous cultural traditions. After being evacuated, displaced, and scattered across the country, the band regrouped and began touring the United States to encourage and support other displaced Katrina victims and promote New Orleans’ recovery.

Hot 8’s incredible tale, which comes across in their life-affirming and powerful music, has also previously featured in Spike Lee’s two New Orleans documentaries, When The Levees Broke and The Creek Don’t Rise, and David Simon’s HBO series Treme (in which the band played themselves), to add to extensive features across the world’s media.

Give Me The Night

Love Will Tear Us Apart

On The Spot EP

Rock With The Hot 8 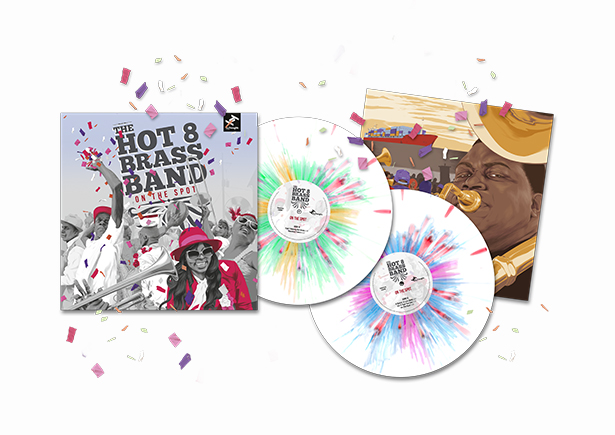 Hot 8 Brass Band release their fifth LP – ‘On The Spot’